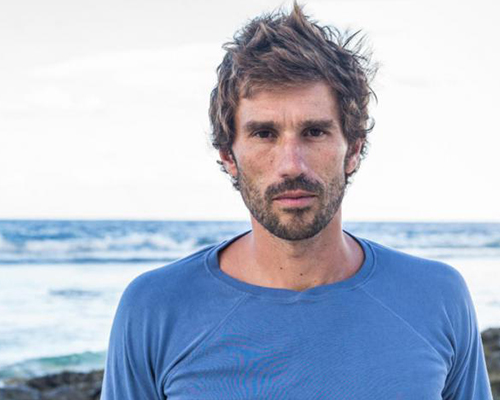 Néry grew up in Nice, by the Mediterranean sea, and discovered freediving by accident when he was 14 years old. He then decided to join a freediving club, where he began to specialise in the constant weight discipline, using fins and without the use of a sled. At 19 years old, he joined the French national team and set a French constant weight national record of -82 meters (which also matched the world record at the time). The following year, he reached -87 meters in constant weight, becoming the youngest world record holder in the history of freediving.
In 2004, Néry travelled to Reunion Island, where he set another world record of -96m.[1] In 2005, while training for the first freediving world championships organized in Nice, Néry reached -100m during a training session. The same year, he reached -105m, which was Jacques Mayol’s last world record, set in 1983 in the No Limits discipline (going down with a sled, and coming up with a balloon filled with air).[2] In 2006, Néry reached -109m.
In 2007, his friend Loïc Leferme died during a training dive.
In July 2008, he broke the constant weight world record for the fourth time with -113 meters. Two months later, with the French freediving team (with Morgan Bourc’his and Christian Maldamé) he became Team World Champion in Egypt. It was the first gold medal for the French Team in a freediving world championship.[citation needed] In 2011, Néry won the constant weight AIDA freediving World Champion title, in Kalamata, Greece, the last title that was still missing in his career, with a dive to -117 meters.[citation needed]
On 8 September 2015, during a pre-competition leading up to the individual world championships in Cyprus, Néry broke his own personal best and set the second deepest dive in history to -126m, two meters away from the world record, held by his friend Alexey Molchanov.[3] He then decided to tackle the world record two days later, on the last day of this pre-competition, 5 days before the start of the World Championships.
On 10 September 2015, Néry made an attempt to dive to -129m, but the judges and organizers made a mistake when setting the dive line, meaning that he actually dived down to -139m.[4] He had a black-out a few meters from the surface and suffered a lung barotrauma. The accident forced him to pull out of the world championships, and he subsequently retired from competition.